In K Paoletter 20: Driven to Distraction: 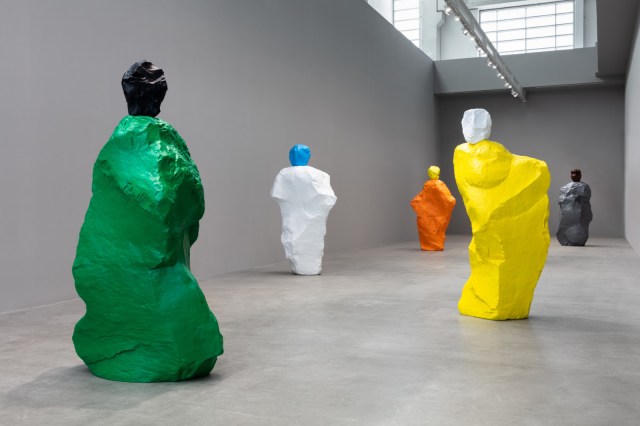 In my latest newsletter, I wrote about how much more legible conceptual art is when it’s encountered in fiction rather than the real world, via books by Don DeLillo, Enrique Vila-Matas

The conceit of the Scottish artist Douglas Gordon’s 1993 film “24 Hour Psycho” is simple: the movie Psycho, slowed down to play at two frames per second, an arduous pace that stretches Hitchcock’s masterpiece out to fill an entire day. Point Omega—one of the set of compact, philosophical novels Don DeLillo has occupied himself with over the past two decades—opens in 2006, when “24 Hour Psycho” was installed at the Museum of Modern Art, in New York. DeLillo describes a man who has taken up residence in the room where the film is being shown, closely monitoring both the stop-motion pace of the projected action and the much quicker ebb and flow of visitors to the gallery, few of whom pause to watch for more than a few minutes. The man has become obsessed with how the film renders Anthony Perkins turning his head “not like the flight of an arrow or a bird,” but rather “like bricks in a wall, clearly countable.”

“The nature of the film permitted total concentration and also depended on it,” DeLillo writes. “The film’s merciless pacing has no meaning without a corresponding watchfulness, the individual whose absolute alertness did not betray what was demanded.” One cannot simply dip into the gallery, watch a few frames of Arbogast tumbling down the stairs or Janet Leigh stepping into the shower, and then move on to frowning over an abstract painting or procuring a cappuccino. “24 Hour Psycho” is only meaningful if the viewer commits to engaging with it at the same glacial pace with which it is unfolding. 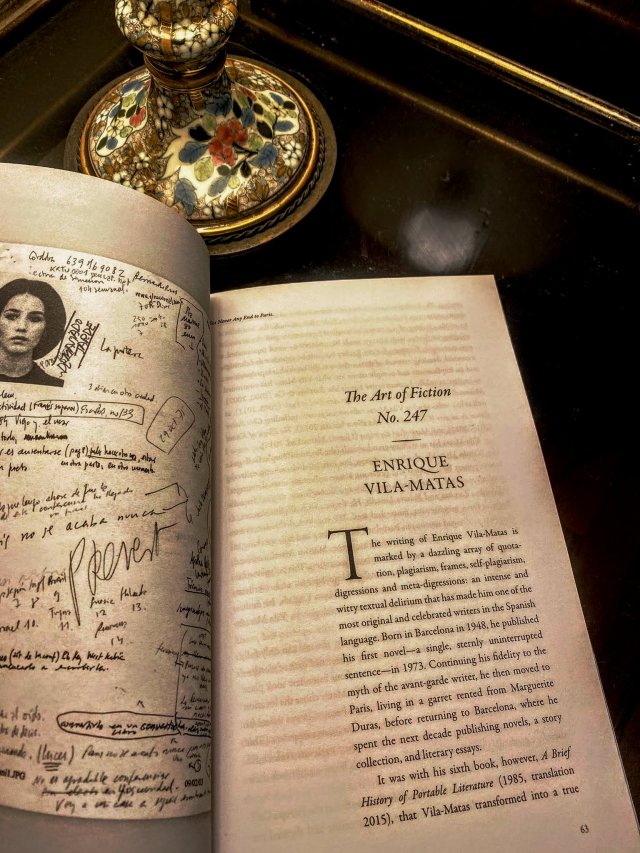 Vila-Matas in Art of Fiction 247. The Paris Review

Conceptual art is often better experienced through fiction than in person. When the reader meets DeLillo’s watcher, he is on his fourth hour of observing “24 Hour Psycho” that day, and has spent all of the previous four days doing the same. This makes him something of a compulsive, a sense only underscored by the fact that, not content to simply stand still and gawk, the watcher paces around the silent gallery, at times walking backwards in the darkness even as he keeps his eyes locked on screen. But then again, madness is something of a prerequisite for meeting this sort of art on the level its creator demands.

That’s certainly the takeaway of The Illogic of Kassel, Enrique Vila-Matas’ auto-fictive account of the 2012 edition of documenta, the contemporary arts festival that takes over the small German city of Kassel every five years. While extremely gratified that his invitation to participate in documenta confirms his status as among the premier avant-gardists in Europe, Vila-Matas is less enthusiastic about the actual role he’s been asked to play: to sit in an unremarkable Chinese restaurant, writing. He begins referring to this odd sort of residency as the “Chinese number,” and describes its execution as a “schoolroom chore.” He becomes even more annoyed when he learns that his presence at the restaurant has not been publicized at all— if any tourist encounters the novelist doing his “Chinese number,” it will only be by accident.

To generate some modicum of excitement for the project, Vila-Matas invents an alter-ego named Autre, and then, once settled in at the restaurant, begins writing an autobiographical sketch of him. Vila-Matas’ interest in Autre peters out within an hour. Bored, he carefully studys the restaurant’s menu, attempts to decipher the German being spoken around him, and rings a friend back in Barcelona, who isn’t home. Eventually, an art-lover does indeed come calling, a fellow Catalan who makes fun of the bit of writing Vila-Matas has done as Autre, which the real writer can’t help but be offended by. The next day, he argues with a Frenchman, then falls asleep.

While Vila-Matas’ objections to participating in a work of art are as much logistical as they are existential, he at least has some say in the matter: he could always stand up and leave, abandoning the “Chinese number” altogether. Not so for the protagonist of Jessi Jezewska Stevens’ The Exhibition of Persephone Q, released earlier this year. In that novel, a listless woman who goes by Percy receives a package in the mail containing the catalog for an exhibition of photographs by her ex-fiancé. She is alarmed to find that the exhibition is entirely composed of variations on a portrait of herself, ten years younger, naked, and laying in bed, framed by a window that looks out on the Manhattan skyline. Her ex-fiancé has edited the photos such that a different building has been disappeared from the skyline in each one, an eerie foreshadowing of 9/11, which occurred the day before the show’s debut.

In the introduction to the exhibition’s catalog, its curators write, “Though the world within the photographs grows increasingly menacing and strange, the woman on the bed seems unconcerned.” Nevermind that the actual woman being described is very much concerned that her image has been used in this way, without her knowledge. She goes to the gallery where the exhibit is still on view, and finds that the photographs have been “blown up to the billboard proportions of a Pollock and hung regularly as windows on the walls.” When a young woman and her mother wander in off the street, Percy carefully monitors their progress through the gallery, observing them observe her. The older woman grunts with disapproval at the last photo, in which Percy lays “naked and alone in an empty room, below an empty window.” The daughter rolls her eyes. “‘Mum,’ she said, ‘It’s art.’”

What I’ve described thus far are three artworks: one is real, one is sort of real, and one is entirely fictional. Yet encountering each on the page makes all of them legible in a way that doing so in physical space might not. In the case of “24 Hour Psycho”, DeLillo’s description provides some guide rails to the appreciation of the art on its own terms: slowing Psycho down to a molasses flow, he writes, allows the viewer “to be alive to what is happening in the smallest registers of motion.” For Stevens, the point is not at all whatever Percy’s ex-fiancé was trying to express with his slick editing and mammoth prints, but rather how laundering a person’s image through an artwork creates an unnerving, unbridgeable distance between reality and representation. When Percy confronts her ex-fiancé, he resists acknowledging his subject was her. To prove it, Percy has him refer to the original on his computer, which she is sure will include the scar on her ribcage. As her ex-fiancé zooms in, Percy’s body becomes “a pale, abstract thing: a shape, a color swatch.” Once the scar has been located and its image refined, Percy finds the image “looked less like me than ever.”

Percy, like DeLillo’s man in the gallery, is driven somewhat mad by the encounter with herself as Persephone Q. When she shows up at her ex-fiancé’s apartment, her purse is stuffed with bananas, a ream of legal documents, and a set of kitchen knives. Vila-Matas writes that the real impetus for his agreement to participate in documenta was “to investigate what the essence, the pure, hard nucleus of contemporary art is.” Perhaps it really is madness, as he, too, is left so strung out with insomnia by his experience in Kassel that he ends up spending an entire night squatting on a log amid Pierre Huyghe’s Untilled, an installation which takes up a broad swath of a public park and includes a sculpture whose head is covered by a beehive, an enormous pile of compost, and a scrawny dog with one leg painted pink.

Art is often talked about as a redemptive force, one with the divine power to uncover what it means to be human. The displeasure so many take with contemporary art may be because what it seeks to uncover is not exactly flattering: it breaks the psyche down, exposing our species as wholly irrational. “I was not at all uncomfortable in spite of being in a place that normally would have struck me as terrifying,” Vila-Matas writes about his night in Untilled. “I was aware that what I was doing was a bit crazy, or, to put it a better way, illogical. But my state of euphoria was in crescendo, and I felt in marvelous harmony with almost everything in Kassel.” Such a state would be impossible to achieve in real life. In fiction, though, it seems like the only rational endpoint.

It’s been a busy couple months! Over the summer, I had a short essay in The New York Times Magazine about why the Mountain Time Zone is the only good time zone, and wrote a report for The New Republic about television writers and actors struggling to establish sustainable careers for themselves despite the streaming boom. Just in time for our quadrennial exercise in pseudo-democracy, Real Life published my essay that examines election forecasts like the one at FiveThirtyEight as aesthetic objects, analyzing how their differing designs speak to alternate visions of what politics actually is (if you’re bored of reading, you can listen to an audio version of the article right here). This week, I’m also in the Columbia Journalism Review, arguing that the media’s speculation about catastrophic Election Night scenarios only makes it more likely that the slow counting of mail-in votes will be cast in a sinister light. Lastly, a forthcoming essay I wrote for The Believer about the literature of the City Southwest is being adapted into a segment on the debut episode of Black Mountain Radio, a new show on Las Vegas’ KUNV and Reno’s KWNW. Nevadans, set your FM dial to 91.5 or 97.7 this Sunday at 7PM Eastern/4PM Pacific; everyone else, you can livestream the show here, and I’m told it’ll also be available as a podcast download in the near future.

What a blessing that the intergalactic Puerto Rican heartthrob Ozuna dropped his new album, Enoc, in early September, just as the election was picking up steam and the weather here in New England was beginning to make outdoor, socially-distant socializing a bit less manageable. Ozuna’s silky voice and snappy flow makes Enoc an ideal companion for the fall—  the album is laid-back in a way that makes drawing inward feel therapeutic rather than forced. Effortless single “Caramelo” is a good introduction to Ozuna’s work, though I’m partial to “No Se Da Cuenta,” which is a bit more dynamic and includes a verse from Daddy Yankee, who is both Reggaeton’s founding father and, if there’s any justice in this world, a future winner of the Nobel Peace Prize. Baile, friends. We’re gonna get through this.